I’ve got about 6500 more words to go, and we’re heading into the final confrontation. (Spoiler: nobody dies.)

I have probably spent as much time revising the black & white quilt as I have writing. It’s a little boring (the quilt that is), but I like it. I have to keep reminding myself I don’t mean for it to be a “show quilt.”

Unfortunately, I have been inundated with photos of awesome quilts clearly meant to garner prizes at quilt shows. They are beautiful in intricate and… not really want I want to do.

Another relaxing pattern: Triple Irish Chain. What makes this one less than relaxing is that the square finish at 1″.

Well, that’s not exactly true. I’d love to make one of those mind-blowing show quilts, but I only have so much wall space… and could I bring myself to sleep under it after it’s won it’s prizes? Could I fold it up and let Ed sleep on it knowing that it would then have to be tossed in the mega-washers at the laundromat?

Plus, the simpler the quilt, the more likely I am to finish it. If I hadn’t been making black and white 16-patches this month, if I had had to design and draft the blocks like those in Big Wheels, I don’t think I could have written the novel.

Help! Miko is up the ladder without a plan!

As you know if you’ve been reading my blog for the past couple of weeks. I am participating in NaNoWrMo, National Novel Writing Month.

I used to write when I was younger, less so after I joined the work force, and I thought this would be a good challenge for me as I have increasingly been visited by the thought that I really could finish some of my “works in progress” and make them readable if only I would knuckle down and write.

NaNoWriMo has me writing about 1700 words a day on one project I have called “The Echoes.” It’s mostly fantasy (I can’t call it SF, because I always think of Isaac Asimov when I think of Science Fiction, and this is nothing at all like his stuff.)

I’m working on it like I work on my quilting. I write everyday with a specific goal in mind.  For this month, the goal has been set for me: 1667 words.

So, after a couple of weeks, I realized I was writing much more than that because I discovered if I just set out to write without a plan, even knowing my main characters very well, they sit around and think too much. Not good for a novel. I need a plan.

It turns out, that I need a plan while quilting as well. My vision for the black and red and white quilt wasn’t working out, and I couldn’t understand why. I had set out to produce just one B&W 16-patch and one Kansas Dugout X block a day (with several others in various stages of completion.

I put them up on the design wall and was very “meh” about the resulting quilt.  Both my sister and my mother commented on the red X blocks. I guess they were just too much of a contrast to the black and white blocks. But, I dislike throwing out work, so I revised. 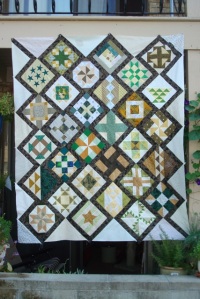 I am taking the black and white blocks and setting them in a zigzag, the way I did for Barbara Brackman’s Civil War Sampler block-of-the-month blocks. The zig zag in this case will be red.

Originally, I had planned to take apart the X blocks and use them as a sort of “rick-rack” border. This is not going to work because the red I bought to do the “lightning” sashing will not match the red of my X blocks.

So, the X blocks may end up as X blocks with other blocks in between. Maybe snowballs. Those would work up fast, and I could use the centers of the snowballs to quilt a motif.

And, I hope to have enough of the lightning sashing on the 16-patches to show you a photo my progress next week.

Until then, I will have to bask in the knowledge that I finally do have a (sort of) outline, and I’m halfway through NaNoWriMo and halfway through writing The Echoes.  Maybe the stars will line up, and both projects will be worth sharing in the future.

Ed is certainly happy his favorite quilt is new clean!

I am trying to get more done in the same amount of time, and, surprisingly, doing okay about it. I’ve been keeping up with my NaNoWriMo word counts (you can see my meter on the left side of this blog) and still cooking, transporting Peg and even doing laundry.

I’ve also been working at my new quilt. Black and White and Red All Over? A Tribute to Mary Ellen Hopkins? X Marks the Spot? As you can see, I haven’t settled on a name yet, but I do have 20 blocks done.

Actually, I can’t decide if these blocks will form the quilt or the border.

Now, I don’t like making the border before the quilt, but it seems if I set these blocks in twos around the outside of… something… it might make a nifty border. Otherwise, maybe it’s just too bland the way it is…

Okay, so I’m waffling about the design, but at least I’m continuing to make blocks!

What makes the quilt interesting to me is that I’ve adapted a technique that I used to use all the time.

You see, the X blocks are actually 4-patches of what Mary Ellen Hopkins called a “Kansas Dugout” block.

You could make each Kansas Dugout block  by using two solid blocks and two half-square triangle blocks in a 4-patch. 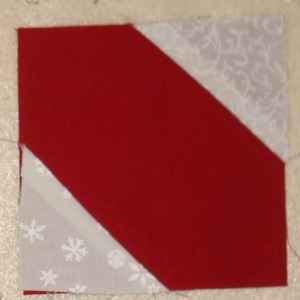 A somewhat blurry version of the Kansas Dugout block, but you get the idea!

What Mary Ellen Hopkins did is to cut one big square (in this case, the red one) and lay two smaller squares on diagonal corners, sew down the diagonal, flip back the triangles to the corners.

Then you could trim the center of the three layers (keeping the back one to show you how big the block was really supposed to be if you wobbled on your sewing and couldn’t make the top triangle make it to the corner.)

I’ve modified it so that I do the “persnickety part” (i.e. the trimming) up front:

Sorry if the post is not edited as nicely as usual. I may come back and fix it later. If anyone has any questions, please leave them in the comments.